Dispelling A Few (Mostly) False Beliefs About Divorce in Maryland – No.1: Adultery

A series of posts about some common divorce law misconceptions that I have encountered over my years of family law practice, in no particular order. (Ok, well that’s not true. Let’s start with sex. That’s a good place to start, right?)

Big Fat Caveat:         Everyone’s case is different. These posts are intended to provide general information about Maryland law. I am not trying to give anyone advice about what is best in that person’s specific situation. As Tolstoy pointed out in the first line of Anna Karenina, “All happy families are alike; each unhappy family is unhappy in its own way.” So, if there is trouble in your corner of paradise, take the time (and spend the money) to consult with a lawyer of your own selection and go over the issues for your case in detail. That is the only way to get advice and guidance that is tailored to your situation.

False Belief No. 1: “If I have sex with someone after my spouse and I voluntarily separate, that’s not adultery.”

What turns “sex” into “sex that is adultery”?

Sex with someone who is not your spouse while you are married is adultery. It’s that simple. (Saved for a later post: Just what kind of sex qualifies as “adultery”?) For a long time, Maryland courts have ruled that a married person cannot enter into an agreement to give up a right to file divorce on grounds of adultery – basically, a spouse cannot be required to sit idly by while the other spouse cheats. So, even if you and your spouse split amicably, and even if you have a written property, support, and custody agreement, there can be no agreement not to file divorce for adultery.

When I say “divorce,” I mean an “absolute divorce” under Maryland law – a proceeding that seeks to terminate a marriage. Maryland also allows for a “limited divorce,” which is as close as Maryland gets to what many people call a “legal separation.” Parties who have only a judgment of limited divorce are still married, but the court has officially recognized that they are living separately, which allows the court to make limited orders about the parties’ living situation (custody, use of a family home) and support (alimony and child support). An absolute divorce terminates a marriage, resolving all matters between the couple, and leaving each former spouse free to remarry.

What difference would adultery make in a divorce proceeding where the parties have already decided to separate?

There are two main ways in which adultery would most likely be relevant:

First, in Maryland, adultery is a grounds for absolute divorce, and one that does not require any waiting period before an absolute divorce case can be filed. “Grounds” means a legal basis for a court to grant a judgment, so adultery as grounds allows a court to grant a divorce to the “innocent” (non-adulterous) spouse. While some grounds require a specified period of separation of up to one year before a divorce can be granted or have other hoops that the parties must jump through, there is no separation period required for divorce based on adultery. You know what that means, right? That pursuing a claim for adultery – in theory at least, setting aside the slowness of some court dockets – allows a spouse to get divorced more quickly than would occur using other grounds. Examples of some other grounds for divorce are “12-month separation” and “desertion,” both of which require a year of separation before a divorce can be finalized, and “mutual separation,” which can be used only if there is a written settlement agreement.[1]

Even though a spouse cannot consent to adultery, it is possible to lose the right to bring a claim for adultery. “Condonation” of adultery occurs if a spouse knowingly allows a cheating spouse to return to the marital relationship after discovering the adultery. In effect, the spouse has forgiven past adultery and so loses the right to seek a divorce on those grounds. Condonation of past adultery does not give carte blanche for future adultery, however.

Next, adultery is also one of the many factors that can be considered when a judge must decide claims for alimony or marital award. Whether adultery might be significant in the financial aspects of divorce, however, usually depends upon whether it was a cause for the breakup of the marriage. Both the alimony and the marital property statutes list many factors that a court must consider in making an alimony or marital property award, and both of them specifically list “the circumstances that contributed to the estrangement of the parties” as one of those factors. Consequently, post-separation adultery that commences after the parties have decided to part ways – the kind of adultery that we are talking about in this post – is typically not a factor that contributed to the parties’ separation, and so is largely not directly relevant – as adultery – to the court’s alimony and marital award determinations.

Of course, when a new relationship begins hot on the heels of a breakup, it may appear that the relationship came first, and thus caused the split. So, even when a relationship is genuinely one that commenced post-separation, that contention may be met with skepticism, depending on the timing of the new relationship.

Keep in mind, however, that adultery – if it contributed to the marriage’s problems – is only one of multiple factors that a court must consider in alimony or marital award cases. Examples of some other factors are: the ages and health of the parties; the abilities of each party to earn; the financial contribution of each party to the marriage; and the length of the marriage. I think that it is fair to say that – as divorce law has modernized – most practitioners do not consider adultery to be a trump card that will benefit the innocent spouse over basic financial considerations, even when adultery was undeniably the cause for the divorce. In other words, the fact that a spouse cheated does not necessarily mean that the innocent spouse will end up in a better position financially than would have occurred without the adultery. At the end of the day, ­it is the arithmetic of the parties’ finances that is typically the most important.

There are, of course, other ways in which behavior that relates to adultery might be relevant to these financial issues. For instance, a spouse who spends marital assets – money from a checking account that contains earnings during the marriage, for instance – on a new companion may be found to have committed marital “waste,” that is, the depletion of marital funds on decidedly non-marital activities. You shouldn’t have to pay for your spouse to take a paramour on a nice trip to Hawaii, for instance, and that is what would happen if marital funds were diminished to pay for the trip.

Is there any other way in which post-separation adultery can affect divorce?

Yes, but the other main issue that I encounter is one of human nature, not of law. Whatever the brain chemistry of jealousy is, it can be pretty powerful. That can be true even when people have made a calm and reasoned decision to separate. Seeing an estranged spouse in a new and happy relationship can really turn the knife in the gut of even the most rational person. This can make interactions between the spouses and negotiations about the divorce more difficult. In many divorces, there is – to butcher the English language – a leaver and a leavee. Often, one person initiates the separation and that person is in a very different place emotionally from the partner who is being left. The leaving party is out the door emotionally by the time of the separation, while the partner who has been left behind is stunned, trying to figure out what just happened, and maybe wondering if there can be a reconciliation. So, even if a new relationship began after an agreed separation, keeping the new relationship in the background as much as possible is probably a good idea. It may avoid adding unnecessary acrimony in finalizing the divorce and unnecessary pain for the other spouse.

Please stay tuned for more posts in this series with information about other divorce issues in Maryland, including financial matters and child custody. Oh, right, and a little more discussion of sex as well …. 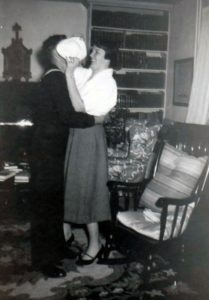 My parents shortly before they were married in 1952. My father was trouble with a capital “T.” My grandparents warned my mother about him but she didn’t listen. That love sure is blind, you know? They were divorced in 1964.

[1] Until the enactment in 2018 of an amendment to the Maryland divorce statute, mutual separation has not been available to couples who had minor children. The 2018 amendment will eliminate this prohibition, effective October 1, 2018.

This entry was posted on Friday, July 27th, 2018 at 12:47 pm and is filed under Blog . You can follow any responses to this entry through the RSS 2.0 feed. Both comments and pings are currently closed.