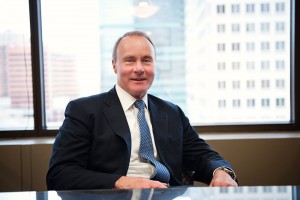 A few weeks after he started practicing law, Mr. Laws became a member of Associated Builders and Contractors, sitting as an ex officio member of the Board for the Baltimore Chapter. Although ostensibly a member of his firm’s labor and employment law department, the interaction with contractors sparked an interest in construction claims litigation that has been a significant part of his practice since. He has litigated construction claims in the tens of millions of dollars throughout the country and represents some of the largest Maryland based construction companies.

Mr. Laws currently serves as an arbitrator for National Arbitration and Mediation (“NAM”).  NAM was voted the #1 ADR Provider in the United States for 2016 in random rankings surveys by the National Law Journal and the New York Law Journal.

Before joining Thomas & Libowitz, Mr. Laws was a partner in what was then the state’s largest law firm, Venable, Baetjer and Howard. He clerked for Harry A. Cole on the Maryland Court of Appeals, until that time the only individual to hold that position while still a student. He also interned for the Honorable James R. Miller in the United States District Court for the District of Maryland, and he taught legal research and writing at the University of Baltimore School of Law. He graduated in the top 10% of his class from the University of Baltimore School of Law day program in two and one-half years, while holding a full-time position at John Hopkins Hospital.

Mr. Laws, a Roman Catholic Permanent Deacon, and his wife, Duffy, currently lead a partnership between their parish in Kingsville, Maryland, and a parish in the slums of Mombasa, Kenya. The partnership has led to the provision of clean drinking water, emergency electrical services, assistance to CRS sponsored healthcare for people with HIV, a community food bank for those unable to provide for themselves, and the establishment of cottage industries to assist women without husbands in providing for their families. In addition, Mr. Laws serves as general counsel to Asian Relief, Inc., the U.S. based fundraising arm of the Sisters of Mary Banneaux, and as advisor to the Sisters.  The Sisters of Mary, operating under the name World Villages, currently operate 15 schools in 7 third-world countries, serving the poorest areas by providing boarding school education to middle and high school age children.  He is currently working with the Sisters as they are in the process of opening a new facility in Tanzania.